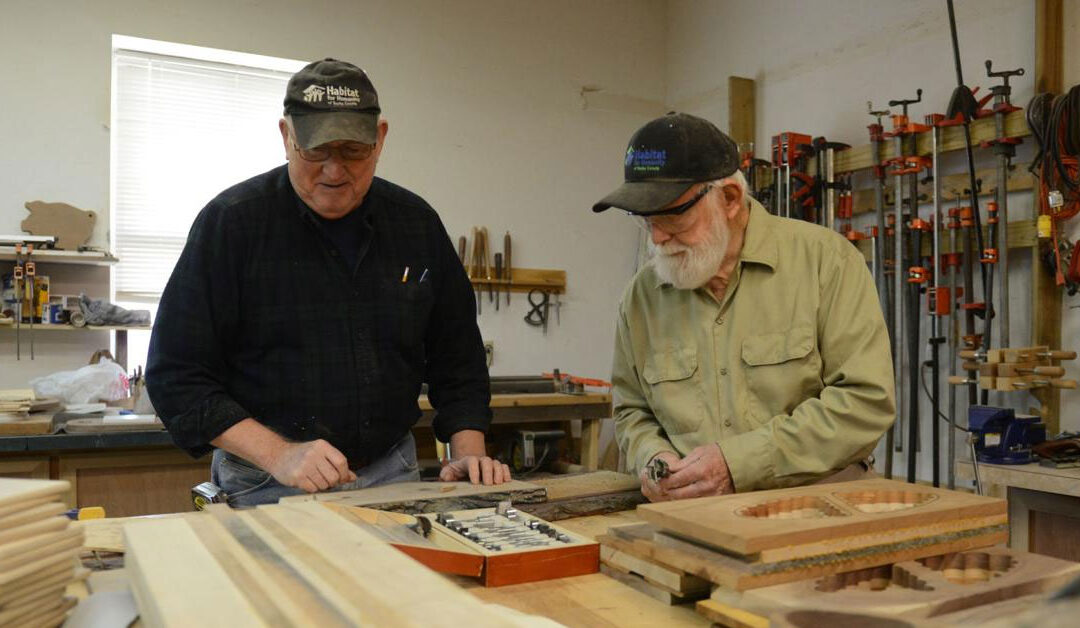 Helping others can be contagious. And it has been for a group of talented Habitat for Humanity volunteers affectionately known as the Woodchucks.

This group of men has put its woodworking skills and experience to great use by handcrafting items, which are sold at various locations throughout Berks County to benefit Habitat for Humanity.

“The volunteers for Habitat understand their role in assisting this community and how their efforts make it possible for families to own their home and overall improve the community,” said Heather Harter, marketing and development manager at Habitat for Humanity of Berks County.

The Woodchucks meet twice a week in the wood shop at the Habitat for Humanity office on South 18th Street. On average, six to eight men make up the group.

Two of them are retired industrial arts teachers. Harter said the men prefer to work behind the scenes.

The wood shop itself has been in existence for a little more than five years, and the group formed several years ago, according to Harter. All of the men volunteer their talents, skills and time.

They use donated wood or wood left over from Habitat for Humanity’s project houses. Some of the items they make include wood bowls, wine glass holders, clocks and items for holidays.

“They each work on specific items that they enjoy doing,” Harter explained, adding that one volunteer specializes in birdhouses, another makes flower boxes and a few are experts in making cutting boards.

Since the group’s beginning, they’ve sold items at ReStore, Habitat for Humanity’s home improvement store and donation center in Muhlenberg Township. In the last year, the volunteers have upgraded their inventory. Higher-end wooden pieces also are for sale at the GoggleWorks Center for the Arts, 201 Washington St.; Jimmie Kramer’s Peanut Bar Restaurant, 332 Penn St.; and Curious on the Avenue in West Reading.

“Some Habitat affiliates do a similar type of thing with woodworking and volunteers,” Harter said. “However, I have yet to see the quality of work that our guys produce.

Small items, such as candle holders and small boards, are priced under $10. More elaborate cutting boards with multiple types of wood and ornate touches cost up to $100 each. All profits benefit Habitat for Humanity’s operating budget, Harter said.

They are looking to sell more items on consignment as well. The volunteers accept orders of bulk items, such as cutting boards for corporate holiday gifts, but they don’t take special orders from the public.

The Woodchucks also help by working on projects for Habitat’s houses, making shelves and cabinets for ReStore and making signs for special events. Harter said the organization received a large wood donation in the form of old wooden bleachers from the Bollman Center at Albright College.

Volunteers used this wood to make exact replicas of the turn-of-the-century windows on the John Updike house in Shillington. The replicas were made from scratch by the men.

“We saved an estimated $30,000 for the John Updike Society when we volunteered to remake the window of John Updike’s boyhood home,” Harter said. “We also have received several compliments on the beauty of their woodwork making cutting boards and serving trays as gifts.”

Read the original article on The Reading Eagle.